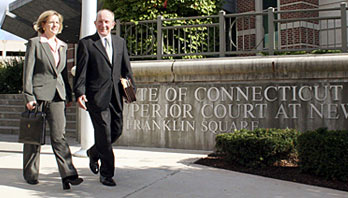 Attorney John A. Barbieri is a highly respected and skilled Trial and General Practice Attorney. He is a graduate of the University of Connecticut School of Law, and Fairfield University and is licensed to practice in all Courts in the State of Connecticut. In addition to his practice, he is active in the community performing pro bono work for the Statewide Legal Services of Connecticut, Saint Brigid’s Church in West Hartford, and the New Britain Bar Association’s Special Master’s Program. He is the former General Counsel for UNICO, former Board Member of Central Connecticut Association for Retarded Citizens (CCARC), has been CCARC’s Chairman of its annual fundraising Golf Tournament for 30 years.

Attorney Claudia R. Barbieri is a highly respected and skilled General Practice Attorney. She is a graduate of the University of the District of Columbia’s David E. Clark School of Law in Washington, D.C. and American University. She joined Barbieri Law, LLC in 2006 after 9 years as a Contract Negotiator- Attorney Advisor for the Smithsonian Institution in Washington, D.C., and a mediator for the Washington Area Lawyers for the Arts. Attorney Barbieri has been appointed for more than 10 years by the New Britain Superior Court as Guardian Ad Litem to represent children who are victims in criminal cases. She has been on the Board of Directors for the Prudence Crandall Center since 2007. She is admitted to the bar in Connecticut, Maryland and Washington, D.C.